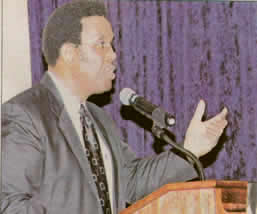 When summarizing the impact of Dr. Martin Luther King Jr., speaker Dr. Richard Bailey of the Air Force Research Institute noted, “Whether you live in Mobile, Minneapolis or Monterey, on the third Monday of January, all roads in America lead to Montgomery.” Attendees and speakers alike pondered the life and legacy of Dr. King during a Martin Luther King Jr. Remembrance Day luncheon Jan. 22 at the Officers’ Club, an event with the theme of “Remember, Celebrate and Act! A Day On, Not a Day Off”.

To further emphasize the theme, 2nd Lt. Sherry Liebnitzky, who served as master of ceremonies, noted, “Remember the little bit you do today can go a long way tomorrow.”
Dr. King was an “ordinary person who accomplished extraordinary things by answering the clarion call for humanity,” said Dr. Bailey. He also brought out lesser-known facts about Dr. King to highlight his ordinariness. When he was an undergraduate at Morehouse College, Dr. King was a member of the glee club even though he did not excel at it. Also, Dr. King graduated Morehouse College with a 2.48 grade point average on a 4-point scale. “He did not allow his 2.48 GPA to deter him,” said Dr. Bailey.

Propelled into action by his strong Christian faith, Dr. King accepted ministry as his calling while at Morehouse, embracing the power of love as a “force . for progressive social change.” The research of political activism was the initial step Dr. King took as a way of “refusing to cooperate with an evil system,” said Dr. Bailey. Mahatma Gandhi’s “example of love and nonviolence” profoundly influenced Dr. King, as he was “inspired by the vision of humanity proceeding toward peace.” He began to see nonviolence as a “primary and necessary means of affecting social change. Love was the heart of the teachings of Jesus,” he said. He adopted all of Gandhi’s practices as “a way of life.” Dr. King was also inspired by the social disobedience of Henry David Thoreau, who went to jail for something in which he believed.
Accepting a ministry position, Dr. King came to Montgomery in 1953, describing it as a “sleepy little city.” But it would not stay that way, and he was propelled into political activism in 1955 during the Montgomery Bus Boycott, during which time he was arrested, and his parsonage was firebombed. The bus boycott transformed King from a scholar- minister into “a man for the  ages,” said Dr. Bailey.

Dr. Bailey said that Dr. King “majored in love, minored in hope.” When Dr. King established the Southern Christian Leadership Conference in 1957, “that was love;” when he won the Nobel Peace Prize in 1964, “that was hope,” said Dr. Bailey. Weeks before his assassination in Memphis in 1968, Dr. King told his congregation at the Ebenezer Baptist Church in Atlanta that he wanted to be remembered as someone who “tried to love somebody and tried to give his life serving others,” said Dr. Bailey. As a final spur to action, Dr. Bailey asked those present to take action like King did to make a difference in the lives of those who are suffering. “I ask you to reach out to the 1 million homeless children in America who see life only through teardrops,” he said. He also cited statistics for those jobless, hungry, depressed, functionally illiterate, or suicidal. “Make this world a better place,” said Dr. Bailey. “Yes, we can.”

Col. Kris Beasley, 42nd Air Base Wing commander, who called the speech Dr. Bailey gave “inspiring from the heart,” likewise encouraged those assembled to work toward a better tomorrow. “Let’s go out and do some good things in the world,” he said.

BOOKS AND SUCH by Dr. Ralph J. Bryson Neither Carpetbaggers Nor Scalawags: Black Officeholders During…

History of Centennial Hill comes to life at Sunday lecture