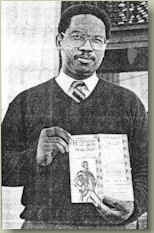 As a young man, Richard Bailey read everything he could get his hands on. He also loved to deliver his hometown Newspaper because it not only provided him with valuable tips on current events, but history lessons as well.

Today, Dr. Bailey is one of the state’s most respected historians, and his love of the past was underscored when he was one of only a few named to the Alabama De Soto Commission.

He and his colleagues spent years trying to come up with answers to a riddle 450 years in the making – what route did the famous Spanish explorer take on his ill-fated trip through the Southeastern United States in the 16th century?

It was a controversial assignment for commission members because they knew that regardless of their findings, there -would be disagreements from those with differing opinions and agendas.

“The biggest disagreement was which route he took when he left the Selma area,” said Dr. Bailey, 44, who is a research and writing specialist at the Center for Aerospace Doctrine, Research, and Education at Maxwell Air Force Base. “Some believe he went into Mississippi, while others feel he went south toward Mobile.”

De Soto’s route has been a puzzle ever since he and his Spanish troops landed in what now is Tampa, Fla., in 1539. His was the latest effort to find gold and other riches in the “New World” discovered 47 years earlier by Christopher Columbus.

It is known that De Soto’s 1,000-man force and the traveling city they inhabited moved through Florida, Georgia, Alabama, Mississippi, Louisiana and Oklahoma.

The exact path may never be known, Dr. Bailey said, because time has taken its toll on the expedition, and there are few clues to make a definitive statement on it.

“It’s impossible to say definitely where somebody traveled 450 years ago,” he said. “There are such widely diverse views on it, that we may never know.”

As the years go by and modern science merges with computerized technology, De Soto’s exact route might be found, he said.

“We don’t have the proper tools right now, but nothing is out of the realm of possibility in the years ahead as we continue to move forward scientifically,” said Dr. Bailey.

A scholar and author, he admits his fascination with De Soto probably had its roots when he was a youngster delivering The Montgomery Advertiser and The Alabama Journal.

His first route included about 135 Journal customers just after he finished the sixth grade, and after finishing the ninth grade he moved on to a bigger route with The Advertiser. He walked part of the time and rode a bicycle other times. He delivered The Journal in the area around Alabama State University near downtown Montgomery and The Advertiser in the Dalraida area.

Dr. Bailey’s pride and joy was his bicycle, bought at Sears and Roebuck with profits from his newspaper routes  I remember it had big rubber tires,” he said with a smile. “It didn’t cost as much as a Schwinn, but it was just what I wanted and needed at the time.”

Most of Dr. Bailey’s life has been spent in academia, and it has given him a special appreciation for good study habits. He has a bachelor ‘s degree in science and two master’s degrees – in education and arts – as well as a doctorate.

He received his bachelor’s and master’s degrees from Alabama State University and then picked up his Ph.D. in philosophy from Kansas State University.   He and his wife, Judy, have two daughters and a son.

In 1985, then-Gov. George Wallace named him to the 32-member Alabama De Soto Commission chaired by Doug Jones of the University of Alabama.  “He (Dr. Bailey) was very enthusiastic about what we were doing and was an asset to our committee,” Dr. Jones said. “He was faithful in his attendance and was not afraid to let his opinions be known. Richard was very supportive or what we did and is a good citizen.”

… Although De Soto’s movements generally are common knowledge to historians, specifics often, are unavailable and amount to a needle in a huge historic haystack.  Those in De Soto’s party who were entrusted to keep records did their best but couldn’t pinpoint exact locations. Whatever they did and wherever they went were firsts – much like the Lewis and Clark expedition into the uncharted Northwest Territory in the early 1800s.

Dr. Bailey and other members of the Alabama De Soto Commission pored over thousands of documents and visited areas the Spaniards are believed to have explored.   De Soto’s army included a little bit of everything – from soldiers to priests who blessed them, from scribes to a large herd of swine.

The huge entourage traveled up to 4,000 miles as it wound its way into the Carolinas, Tennessee and then down to Mexico during a three-year odyssey in search of treasure that always eluded them.

De Soto’s caravan “discovered” the Mississippi River, and it is believed he was buried there in 1541 when he died of fever, Dr. Bailey said.

A major assignment of the Alabama De Soto Commission was to designate a trail to spotlight the route taken by the Spaniards. For historians such as Dr. Bailey, it offered a rare opportunity,

“We got a chance to look at the expedition from an academic perspective,” he said. “We dealt with the opening up of the New World by the Europeans. Few people today can condone De Soto’s methods, but the trip itself was a major historical event.”  Dr. Bailey believes that De Soto and his troops entered the state in the Childersburg area, but he tends to disagree with those who feel the Spaniard went through the east Alabama city.

… He said the biggest question mark of all on finding the definitive route is the exact location of Mabila where De Soto got his comeuppance at the hands or Chief Tascaluza and about 5,000 Indians.

Some historians believe Mabila is somewhere near Cahawba, which is about 12 mills southwest of Selma. Others contend it’s in Clarke County, while another group feels it’s in the Mobile area because of the spelling similarity.

“If we can determine the exact location of Mabila, I think it would go a long way in figuring out the definitive route taken by De Soto on his way toward the Mississippi River,” Dr. Bailey said.

Chief Tascaluza, angered by the brutal treatment of his people by the Spanish explores lured De Soto and a group into the walled city of Mabila and then sprang his trap.

By the time the smoke and dust had cleared, a large portion of the De Soto expedition lay dead or dying and the rest was, indeed, history as it worked its way into virtual oblivion.

Only a handful of the De Soto group ever got back to Spain and 450 years later, their trek through Alabama is noted by markers from U.S. 270 in the Piedmont area near the Georgia line to U.S. 82 west of Tuscaloosa near the Mississippi border.   Dr. Bailey believes Mabila is in the Cahawba area and that De Soto moved west from that point toward Mississippi.

His tenure with the Alabama De Soto Commission is viewed as another learning experience – one which provided him invaluable political as well as historical lessons.

“I think we can look back at that time in our history arid learn the value of keeping good records based on what we see and not what our perspectives might be,” he said.

In the meantime, he’s looking ahead to the 500th anniversary of De Soto’s trek…around the year 2040.   Richard Jr. is only 1 year old, “so he should be about theright age when they try to find the definitive route again.”

Tuskegee Airman Finally gets his Due