Fact Finder: A historian researched the exploits of a celebrated black Union soldier

John Carraway served one term as a Mobile alderman in 1869, which overlapped his earlier election to the Alabama House of Representatives in 1868, said historian Richard Bailey. 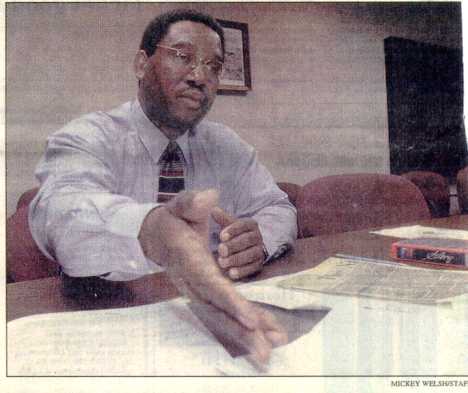 Historian Richard Bailey of Montgomery
discusses the Civil War era song ‘Colored
Volunteers’ by John Carraway, who lived
much of his life in Alabama.

Bailey, who has a doctorate in 19th century American history, is research and writing specialist with the Air University Press at Maxwell Air Force Base.

In his book, “Neither Carpetbaggers nor Scalawags,” and in an interview last week, Bailey recalled his extensive research into Carraway’s past for his doctoral dissertation.

His research turned up no photograph of John Carraway, Bailey said.

Born in New Bern, N.C., in 1834, Carraway was the son of a wealthy white planter, Charles Carraway, and a slave woman whose name did not show up in historical records, Bailey said.

Carraway received his freedom upon the death of his father and traveled to Alabama, then back to New York, where he became a tailor.

After the war, Carraway returned to Alabama to live with his mother in Mobile, where he also became president of the Loyal Newspaper Society of Alabama and assistant editor of the Mobile Nationalist, the first black-oriented newspaper in Alabama, Bailey said.

Although Bailey can place Carraway in Company A of the 54th Massachusetts Regiment from March 3, 1863, to March 30, 1865, he found no record of Carraway excelling in a leadership role.

However, Bailey did discover an extraordinary piece of history related to Carraway’s military service in the 54th. As a private in the 54th, Carraway wrote a song, “Colored Volunteers,” about the experiences of the black soldiers in the unit.

Although this information was well-documented in Bailey’s research, nowhere in 15 years of searching had he found the song set to music.

What complicated Bailey’s search was the fact the song written by Carraway shows up in different sources under various titles and attributed to an unknown songwriter.

During a recent conversation with his boss, Col. Allan W. Howey, Director of the Air University Press, Bailey mentioned his interest in a song from the Civil War called “Colored Volunteers.”

“I said, ‘There was nothing about ‘Colored Volunteers’ in the movie ‘Glory,’ ” Bailey said. “He (Howey) said that he thought he heard the music.”

However, Bailey never had been able to associate any music with Carraway’s song.

The day after their conversation, Howey brought to the office a book of “Ballads and Songs of the Civil War” by Jerry Silverman, Published in 1993 by Mel Bay Publications.

Howey purchased the songbook last year during a visit to the Gettysburg Military National Park. On page 15 is a song labeled “The Regimental Song of the Massachusetts 54th(Colored) Regiment.”

“But the song is entitled ‘Give Us a Flag’ and is set to the tune of ‘Hoist Up the Flag’ by Billy Holmes,” Bailey said.

In the movie “Glory,” the 54th Massachusetts is shown marching to the instrumental tune “Give Us a Flag,” which Howey recognized from his songbook.

Carraway’s original tune to the song might be lost, but Billy Holmes’ music gives the words life.

The song lyrics were the same as Carraway’s “Colored Volunteers,” Which Bailey saw for the first time in a story in the Birmingham News in 1990.

“What we have here, for the first time since the Civil War, are the pieces of the puzzle linked together,” Bailey said. “The words, the songwriter, and the music.”

BTW High School Welcomes Back Graduates of All Ages

Alumni representing almost all of the graduating classes of the former Booker T. Washington High…

BOOKS AND SUCH by Dr. Ralph J. Bryson Neither Carpetbaggers Nor Scalawags: Black Officeholders During…