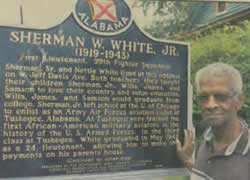 It took more than six decades, but Tuskegee Airman Sherman W. White Jr. was finally honored Monday on a day when Americans paid  tribute to their war dead.  Overcast, rainy skies failed to hold down the crowd outside a house at 690 W. Jeff Davis Ave. as speakers praised a young man who paid the supreme sacrifice in defense of his country. A plaque, unveiled near  the sidewalk where White  and his family lived during World War II, mentioned their patriotism and sacrifices at home and aboard in the name of national defense.

While died July 2, 1943, when his P-40 fighter was shot down by German planes over Sicily as he and other Tuskegee Airmen escorted U.S. bombers to enemy installations. A second member of White’s unit also died when his plane was shot down. “Despite what you might see and feel, the sun is shining today,” said Montgomery  historian Richard Bailey. Bailey mentioned several prominent black families and individuals who have lived on West Jeff Davis Avenue. He said the White marker “will add more than just a footnote to Montgomery  history.”  The crowd was large and appreciative as speakers lauded White. Veterans of several wars were on hand to honor his memory. “It is right today that we honor (White) and all of the brave,” said retired Army Maj. Gen. Will Hill Tankersley, an infantry officer who saw combat during the Korean War. The plaque cost about $1,700 and was paid for by the Montgomery Area  Chamber of Commerce Historical Preservation and  Promotion Foundation, said Chamber spokeswoman Patsy Guy, who attended the event.

The ceremony  followed efforts by local historians who have been trying to draw attention to White and his brief but heroic service during World War II.

White graduated in the third Tuskegee Airmen class in May 1942 and was the first Montgomery native to complete basic training with a unit that would blaze a trail of glory across the skies of north Africa, Sicily and Germany.

He and another Tuskegee Airman, James McCullin, were believed to have been among the first black pilots killed during the war.

Montgomery historian Wesley Newton wrote an article about White and his family in Alabama Heritage magazine two years ago. That launched efforts to honor White in his hometown.

Most of White’s relatives died years ago, but a cousin, Samson White, was on hand for the unveiling Monday morning.

It began to rain as the program began, but no one seemed to mind. They just opened their umbrellas and listened to glowing accounts of the young pilot who had given his life for his country.

“We have a lot of catching up to do,” said retired Air Force Maj. Carrol Woods of Montgomery, who referred to oversights
and slights involving black troops who served during World War II. Woods, a Tuskegee Airman who was shot down by ground
fire and spent several months in a prisoner of war camp, stood in the back of the big crowd. He was urged to step forward and
say a few words. Although  Woods did not know White praised him for his contribution to the war effort.

State Rep. John Knight of Montgomery, who was awarded the Silver Star medal for heroism in the Vietnam War, called
the unveiling a “great occasion” and said: “We are some of the most patriotic people you have ever seen when it comes to the United States military and trying to defend our country.”

Song is part of soldier's legacy Fact Finder: A historian researched the exploits of a celebrated…